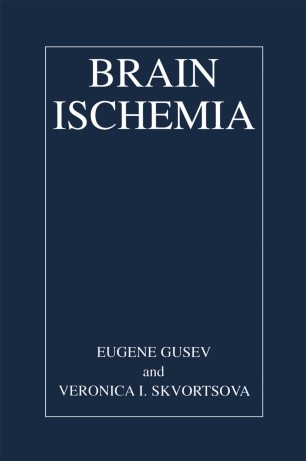 Ischemia is localized tissue anemia due to obstruction of the inflow of arterial blood, thus brain ischemia is the condition where insufficient blood is delivered to the brain. Many physiological processes occurring in the brain critically depend on the state of its energy metabolism. The state of brain energy metabolism in turn depends on the delivery of oxygen and glucose to the brain via the bloodstream. Although it comprises only 2% of the total body weight, the human brain consumes 20-25% of the oxygen and up to 70% of the free glucose taken in by the body. The brain respires more intensively than any other organ of the body. The intensity of oxygen consumption by cortical brain tissue much exceeds the demands of other tissues (5.43 mmol 02/g per h versus 3.06 and 4.02 mmol for heart at rest and intensively working, respectively, 2.4 mmol for kidneys, and 1.8 mmol for liver). Oxidative phosphorylation in mitochondria generates 95% of the adenosine triphosphate (ATP) that is formed in the brain. Thus, it is clear why insufficiency of oxygen delivery to brain cells adversely affects brain function. Glucose is the main energy-providing substrate in the brain. The basic pathway of its metabolism in neural tissue is aerobic glycolysis.