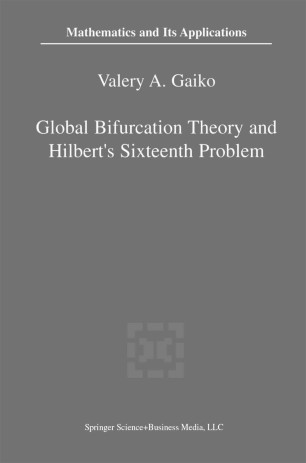 Part of the Mathematics and Its Applications book series (MAIA, volume 562)

On the 8th of August 1900 outstanding German mathematician David Hilbert delivered a talk "Mathematical problems" at the Second Interna­ tional Congress of Mathematicians in Paris. The talk covered practically all directions of mathematical thought of that time and contained a list of 23 problems which determined the further development of mathema­ tics in many respects (1, 119]. Hilbert's Sixteenth Problem (the second part) was stated as follows: Problem. To find the maximum number and to determine the relative position of limit cycles of the equation dy Qn(X, y) -= dx Pn(x, y)' where Pn and Qn are polynomials of real variables x, y with real coeffi­ cients and not greater than n degree. The study of limit cycles is an interesting and very difficult problem of the qualitative theory of differential equations. This theory was origi­ nated at the end of the nineteenth century in the works of two geniuses of the world science: of the Russian mathematician A. M. Lyapunov and of the French mathematician Henri Poincare. A. M. Lyapunov set forth and solved completely in the very wide class of cases a special problem of the qualitative theory: the problem of motion stability (154]. In turn, H. Poincare stated a general problem of the qualitative analysis which was formulated as follows: not integrating the differential equation and using only the properties of its right-hand sides, to give as more as possi­ ble complete information on the qualitative behaviour of integral curves defined by this equation (176].