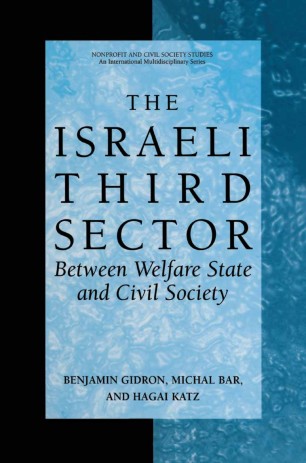 Between Welfare State and Civil Society

The First Directory of Israeli Researchers published a few years ago revealed for the first time that there were 48 researchers from 11 disciplines in 14 different academic institutions in this small Middle Eastern country. It is not surprising, therefore, that with such intellectual resources, Israel can produce year after year social science research of the highest quality such as this first case study of its Third Sector. The three authors, each with an impressive record ofhighly regarded, sophisticated empirical research were selected to participate in the first of a series of international comparative studies of nonprofit organizations in the mid-1990', directed by Lester M. Salamon, Director of the Center for Civil Society at Johns Hopkins University in the US. This book is an outcome of the analysis of data collected from two main sources:The Hopkins Project and the Israeli Third Sector Database recently developed by the Israeli Center forThird Sector Researchat Ben Gurion University of the Negev in Beer-Sheva. Originally part of an international study involving 40 countries in Europe, Asia, Latin America, and the US, the first results were published in 1999 in Global CivilSociety:DimensionsoftheNonprofitSector,editedbySalamonand hisassociates. It was here that I learned for the first time the extent of the economic importance of the Israeli third sector, the subject of this book.