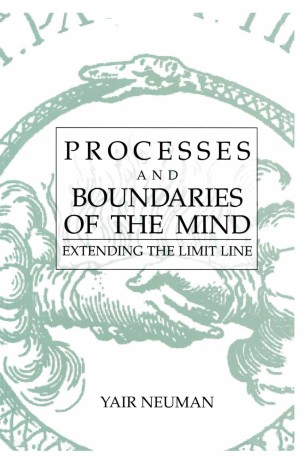 Processes and Boundaries of the Mind

How is it that the world is conceived as exclusively populated by objects (e.g. books, cars, numbers, and people) while cognition is first and foremost a dynamic process? Inquiring into the `reified universe' Dr. Neuman explores questions of mind, reality, knowledge and signification in a provocative, stimulating and humorous way. Drawing on various domains such as systems research, semiotics, philosophy, and complexity sciences, Dr. Neuman is touching basic questions of our Being-in-the-World as cognate creatures, and presents a novel theory of the mind as a boundary phenomenon. Following the footsteps of Gregory Bateson and Valentine Volosinov, the book propagates a process-oriented theory of the mind, in a way that has never been presented before. In this context, new and creative solutions are presented for a variety of old philosophical problems such as: What is the Mind? Why do we use different signs for the same object across different cultures? and how is it possible to think on our thinking without getting into problems such as an infinite regression.

"Can the ancient riddles of cognition, consciousness, and identity be approached from viewpoints other than that of one or another area of specialization? In his book Dr. Neuman undertakes to do this, taking a seamless systems approach - one that makes use, in seamless conjunction, of findings from a variety of fields: philosophy, psychology, anthropology, religious studies, and literary criticism among others. The fertile ideas in this work are not intended to be a last word on this difficult subject, but a first word. They are excellent springboards for thought for solitary thinkers, as well as those who come together to grapple with profound enigmas that lie at the very essence of human existence."
(Joe Engelberg, Emeritus Professor of Biophysics, Chandler Medical Center, University of Kentucky, author of "The Nature of Integrative Study")
"This is a witty, erudite and multi-faceted approach to "the hole in the bagel" - the fact that mind, as Dr. Neuman argues, is not so much an entity, but a boundary phenomenon with mental operations lying in a recursive system of which it is a part and on which it reflects. Others, like Gregory Bateson have advanced this argument but Bateson did not explore his ideas in relation to other key linguists or modern philosophers with similar ideas - at least in print. Neuman has brought them together, Bateson, Volosinov, Merleau-Ponty and others with great clarity, pondering on the logic and meaning of a process determined by the dynamic of its units but which also includes the dynamics of the whole as part of its operation. This book is a considerable accomplishment, thorough in its scope, original in its presentation and eminently readable."
(Peter Harries-Jones, Professor of Anthropology, York University, Toronto, author of: "A Recursive Vision: Ecological Understanding and Gregory Bateson")