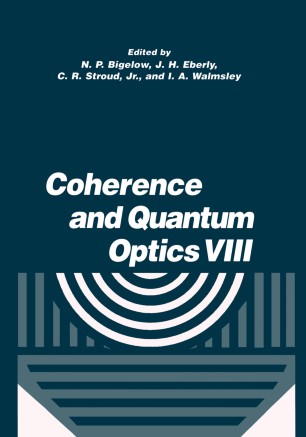 Proceedings of the Eighth Rochester Conference on Coherence and Quantum Optics, held at the University of Rochester, June 13–16, 2001

The Eighth Rochester Conference on Coherence and Quantum Optics was held on the campus of the University of Rochester during the period June 13-16,2001. This volume contains the proceedings of the meeting. The meeting was preceded by an affiliated conference, the International Conference on Quantum Information, with some overlapping sessions on June 13. The proceedings of the affiliated conference will be published separately by the Optical Society of America. A few papers that were presented in common plenary sessions of the two conferences will be published in both proceedings volumes. More than 268 scientists from 28 countries participated in the week long discussions and presentations. This Conference differed from the previous seven in the CQO series in several ways, the most important of which was the absence of Leonard Mandel. Professor Mandel died a few months before the conference. A special memorial symposium in his honor was held at the end of the conference. The presentations from that symposium are included in this proceedings volume. An innovation, that we believe made an important contribution to the conference, was the inclusion of a series of invited lectures chaired by CQO founder Emil Wolf, reviewing the history of the fields of coherence and quantum optics before about 1970. These were given by three prominent participants in the development of the field, C. Cohen-Tannoudji, 1. F. Clauser, and R. I. Glauber.