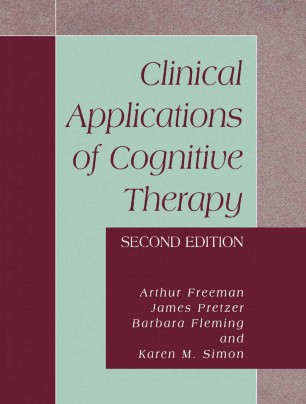 As practical and insightful as its predecessor, the second edition of this acclaimed text gives students of cognitive and cognitive-behavioral therapy a solid grounding in principles while modeling an integrative approach to the problems they will encounter most. The same quartet of knowledgeable clinicians who authored the original have updated and restructured their work to take readers through the best of contemporary cognitive practice, from intake interview and case conceptualization to the crucial final meetings. Their goal is to offer empirically valid interventions that truly address the complex problems of today’s clients, and this straightforward volume presents these strategies with maximum utility for trainee and clinician alike.

•  Clinical vignettes and verbatim transcripts illustrating interventions in action.
•  Guidelines for assessing clients throughout the course of therapy.
•  Effective ways to strengthen the therapeutic relationship.
•  Equal coverage on treatment of Axis I and personality disorders.
•  New chapters on treatment of children, adolescents, couples, and groups.
•  Techniques for getting past roadblocks, dealing with non-compliance, and avoiding relapses.

Uncovering new clinical possibilities, debunking common misconceptions, and encouraging readers to sharpen their skills, the authors show why, decades after its inception, cognitive therapy continues to get results.

The second edition of Clinical Applications of Cognitive Therapy is an invaluable source of knowledge for researchers and advanced students of behavior therapy, clinical and counseling psychology, psychiatry, and psychiatric social work, and for clinicians at all levels of practice.

Dr. Arthur Freeman is the Dean of Counseling, Education, Psychology and Social work at the University of St. Francis in Fort Wayne, Indiana. Prior to his move to Indiana, he was Professor and Chair of the Department of Psychology and Director of the doctoral program in Clinical Psychology at the Philadelphia College of Osteopathic Medicine. He has remained in the position of Professor since his move. He completed his undergraduate and early graduate work at New York University and his doctoral
work at Teachers College-Columbia University. He studied at the Alfred Adler Institute in New York under Drs. Kurt and Alexandra Adler, the Institute for Rational Living under Dr. Albert Ellis, and completed a Postdoctoral Fellowship at the Center for
Cognitive Therapy at the University of Pennsylvania under Dr. Aaron T. Beck.

In addition to 50+ book chapters, reviews and journal articles, he has published twenty three professional books on the topic of CBT including: Cognitive Therapy of Personality Disorders (with Aaron T. Beck), Clinical Applications of Cognitive Therapy, The Comprehensive Casebook of Cognitive Therapy (with Frank Dattilio). Dr. Arthur Freeman has published two popular books, Woulda, Coulda, Shoulda: Overcoming Mistakes and Missed Opportunities (with Rose DeWolf) and The Ten Dumbest Mistakes Smart People Make, and How to Overcome Them (with Rose DeWolf). His work has been translated into Bulgarian, Chinese, Dutch, German, Italian, Japanese, Portuguese, Spanish, and Swedish. Dr. Freeman serves on the editorial boards of several U.S. and international journals.

In 2000, the Pennsylvania Psychological Association named him recipient of its award for "Outstanding Contribution to the Science and Practice of Psychology."  Dr. Arthur Freeman has been a Visiting Professor of Psychiatry and Psychology at the Universities of Umea and Gothenburg (Sweden); at the University of Catania (Italy), at the Shanghai Second Medical University (China). He has lectured in twenty five countries over the past 20 years.

James Pretzer, Ph.D., is the Director of the Cleveland Center for Cognitive Therapy, a consulting editor at Behavior Online, and is Assistant Clinical Professor of Psychology at Case Western Reserve University.  He completed his post-doctoral training with Aaron T. Beck, MD.  He has authored a number of papers and book chapters on Cognitive Therapy, with his work translated in Swedish, German, and Japanese.

Dr. Barbara Flemming is the director of the Anxiety Treatment Center in Cleveland, Ohio, Assistant Clinical Professor of Psychology at Case Western Reserve University, and President of Behavioral Health Associates, Inc.  She received her Ph.D. in Clinical Psychology from Michigan State University and completed post-doctoral training with Aaron T. Beck, MD.  She has authored a number of papers and book chapters on the treatment of anxiety disorders and other topics, with her work translated in Swedish, Japanese, and German.