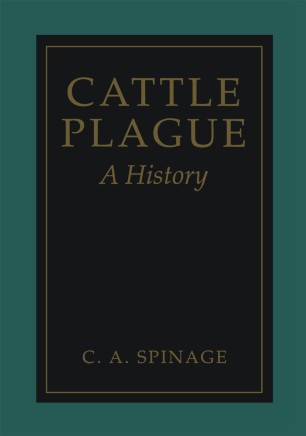 Cattle Plague: A History is divided into five sections, dealing with the nature of the virus, followed by a chronological history of its occurrence in Europe from the Roman Empire to the final 20th century outbreaks; then administrative control measures through legislation, the principal players from the 18th century, followed by an analysis of some effects, political, economic and social. Then follows attempts at cure from earliest times encompassing superstition and witchcraft, largely Roman methods persisting until the 19th century; the search for a cure through inoculation and the final breakthrough in Africa at the end of the 19th century. The last section covers the disease in Asia and Africa. Appendices cover regulations now in force to control the disease as well as historical instructions, decrees and statutes dating from 1745-1878.

C.A. Spinage, is a retired African wildlife ecologist with a particular interest in rinderpest in Africa. He is a one-time lecturer at the College of African Wildlife Management, Tanzania, and was a senior professional grade employee of the Food and Agricultural Organisation of the United Nations, responsible for advising governments at the highest level on wild life management in several African countries. He is now retired and spends his time researching and writing; Cattle Plague: A History being the result of some eight years' fulltime work and over thirty years' interest.