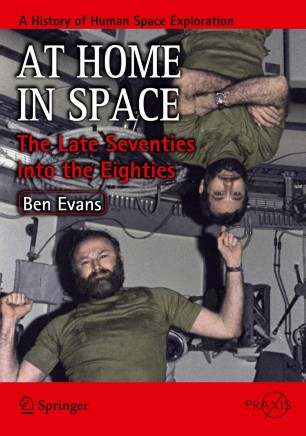 At Home in Space

The Late Seventies into the Eighties

April 12, 2011, is the 50th anniversary of Yuri Gagarin's pioneering journey into space. To commemorate this momentous achievement, Springer-Praxis is producing a mini series of books that reveals how humanity's knowledge of flying, working, and living in space has grown in the last half century.

At Home in Space, the third book in the series, continues the story throughout the later Seventies and into the Eighties. It was a period of time characterised by great promise. Regular Soviet missions demonstrated that humanity could not only survive, but thrive, in a weightless environment, and the arrival of the Space Shuttle seemed to offer a more economical and routine means of accessing the heavens. Living in space became truly international as astronauts from many nations lived and worked together on Soviet space stations and aboard the Shuttle. At the same time, however, relations between two key players in this drive to conquer the high ground of space - the United States and the Soviet Union - steadily declined from the high-watermark of Apollo-Soyuz to the nadir of Star Wars. This third volume charts the progress made in space during this pivotal phase of humanity's quest to explore the final frontier.