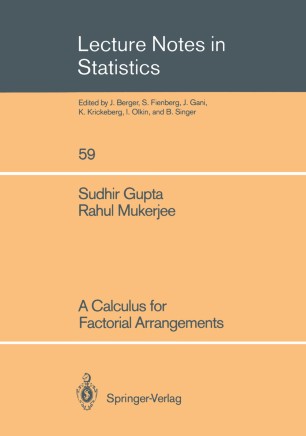 A Calculus for Factorial Arrangements

Factorial designs were introduced and popularized by Fisher (1935). Among the early authors, Yates (1937) considered both symmetric and asymmetric factorial designs. Bose and Kishen (1940) and Bose (1947) developed a mathematical theory for symmetric priIi't&-powered factorials while Nair and Roo (1941, 1942, 1948) introduced and explored balanced confounded designs for the asymmetric case. Since then, over the last four decades, there has been a rapid growth of research in factorial designs and a considerable interest is still continuing. Kurkjian and Zelen (1962, 1963) introduced a tensor calculus for factorial arrangements which, as pointed out by Federer (1980), represents a powerful statistical analytic tool in the context of factorial designs. Kurkjian and Zelen (1963) gave the analysis of block designs using the calculus and Zelen and Federer (1964) applied it to the analysis of designs with two-way elimination of heterogeneity. Zelen and Federer (1965) used the calculus for the analysis of designs having several classifications with unequal replications, no empty cells and with all the interactions present. Federer and Zelen (1966) considered applications of the calculus for factorial experiments when the treatments are not all equally replicated, and Paik and Federer (1974) provided extensions to when some of the treatment combinations are not included in the experiment. The calculus, which involves the use of Kronecker products of matrices, is extremely helpful in deriving characterizations, in a compact form, for various important features like balance and orthogonality in a general multifactor setting.