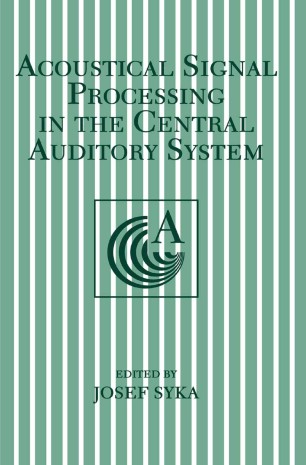 The symposium on Acoustical Signal Processing in the Central Auditory System which was held in Prague on September 4--7, 1996 was the third in a series organized in Prague, after the Neuronal Mechanisms of Hearing symposium in 1980 and Auditory Pathway - Structure and Function symposium in 1987. Approximately 100 scientists regis­ tered for the symposium and presented 82 separate papers and posters. The present vol­ ume contains 53 of these contributions, mostly presented at the symposium as invited review papers. Several essential changes occurred since the previous meeting in 1987. In auditory neuroscience, recently developed methods opened new horizons in the investigation of the structure and function of the central auditory pathway. Methods like c-fos tracing tech­ niques and monoclonal antibodies for neurotransmitters and their receptors, like the intro­ duction of electrophysiological recording from brain slices have made possible new insights into the function of individual neurons and their interconnections, particularly in the cochlear nuclei and in the superior olivary complex. Integrative approaches towards understanding the central auditory function started to dominate in the field. It is not easy at the present time to differentiate between purely morphological and neurochemical ap­ proaches; similarly electrophysiological approaches are accompanied inevitably by behav­ ioral and psychophysical studies. The understanding of human brain function advanced significantly during the last several years. mainly due to the contribution of magneto­ encephalography. positron emission tomography and functional nuclear magnetic reso­ nance imaging.