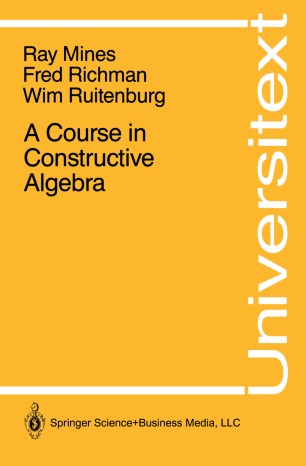 A Course in Constructive Algebra

The constructive approach to mathematics has enjoyed a renaissance, caused in large part by the appearance of Errett Bishop's book Foundations of constr"uctiue analysis in 1967, and by the subtle influences of the proliferation of powerful computers. Bishop demonstrated that pure mathematics can be developed from a constructive point of view while maintaining a continuity with classical terminology and spirit; much more of classical mathematics was preserved than had been thought possible, and no classically false theorems resulted, as had been the case in other constructive schools such as intuitionism and Russian constructivism. The computers created a widespread awareness of the intuitive notion of an effecti ve procedure, and of computation in principle, in addi tion to stimulating the study of constructive algebra for actual implementation, and from the point of view of recursive function theory. In analysis, constructive problems arise instantly because we must start with the real numbers, and there is no finite procedure for deciding whether two given real numbers are equal or not (the real numbers are not discrete) . The main thrust of constructive mathematics was in the direction of analysis, although several mathematicians, including Kronecker and van der waerden, made important contributions to construc­ tive algebra. Heyting, working in intuitionistic algebra, concentrated on issues raised by considering algebraic structures over the real numbers, and so developed a handmaiden'of analysis rather than a theory of discrete algebraic structures.