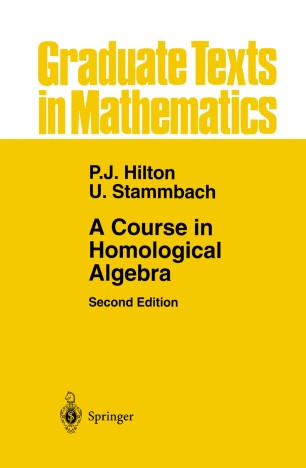 A Course in Homological Algebra

We have inserted, in this edition, an extra chapter (Chapter X) entitled "Some Applications and Recent Developments." The first section of this chapter describes how homological algebra arose by abstraction from algebraic topology and how it has contributed to the knowledge of topology. The other four sections describe applications of the methods and results of homological algebra to other parts of algebra. Most of the material presented in these four sections was not available when this text was first published. Naturally, the treatments in these five sections are somewhat cursory, the intention being to give the flavor of the homo­ logical methods rather than the details of the arguments and results. We would like to express our appreciation of help received in writing Chapter X; in particular, to Ross Geoghegan and Peter Kropholler (Section 3), and to Jacques Thevenaz (Sections 4 and 5). The only other changes consist of the correction of small errors and, of course, the enlargement of the Index. Peter Hilton Binghamton, New York, USA Urs Stammbach Zurich, Switzerland Contents Preface to the Second Edition vii Introduction. . I. Modules.