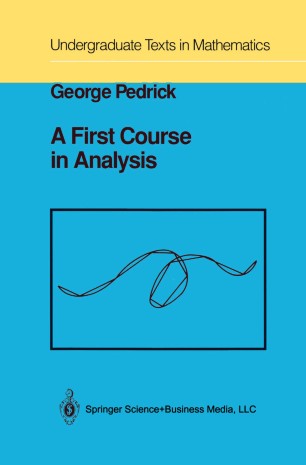 A First Course in Analysis

The first course in Analysis, which follows calculus, along with other courses, such as differential equations and elementary linear algebra, in the curricu­ lum, presents special pedagogical challenges. There is a change of stress from computational manipulation to "proof. " Indeed, the course can become more a course in Logic than one in Analysis. Many students, caught short by a weak command of the means of mathematical discourse and unsure of what is expected of them, what "the game" is, suffer bouts of a kind of mental paralysis. This text attempts to address these problems in several ways: First, we have attempted to define "the game" as that of "inquiry," by using a form of exposition that begins with a question and proceeds to analyze, ultimately to answer it, bringing in definitions, arguments, conjectures, exam­ ples, etc. , as they arise naturally in the course of a narrative discussion of the question. (The true, historical narrative is too convoluted to serve for first explanations, so no attempt at historical accuracy has been made; our narra­ tives are completely contrived. ) Second, we have kept the logic informal, especially in the course of preliminary speculative discussions, where common sense and plausibility­ tempered by mild skepticism-serve to energize the inquiry.