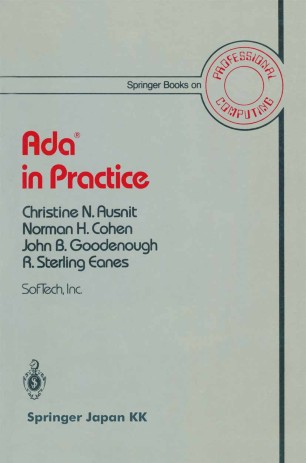 Ada® in Practice started lifeas a case studies report, the result of work per­ formed under government contract at SofTech, Inc. as part of an effort to identify and resolve issues related to Ada usage. Although that report has now evolved into a book intended for a more general audience, its objectives are largely unchanged. Asbefore,the primary goal is to promote effective use of Ada, both in general programming and design practice and in embedded computer systems specifically. Many features of Ada will be new to pro­ grammers and designers familiar with other languages; the program examples presented in the case studies are intended to serve as guidelines for proper usage of such features while pointing out common misconceptions and programming errors. In addition, we hope that this book as a whole will highlight the advan­ tages of using Ada at all stages of a program's life cycle, from problem analysis through testing and maintenance. However, it does not purport to hold all the answers to questions ofAda application;areas that would benefit from further investigation or more definitive guidelines are also suggested.