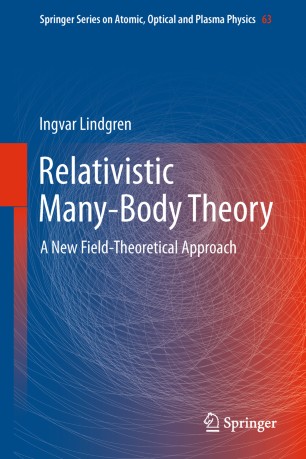 Relativistic Many-Body Theory treats — for the first time — the combination of relativistic atomic many-body theory with quantum-electrodynamics (QED) in a unified manner. This book can be regarded as a continuation of the book by Lindgren and Morrison, Atomic Many-Body Theory (Springer 1986), which deals with the non-relativistic theory of many-electron systems, describing several means of treating the electron correlation to essentially all orders of perturbation theory. The treatment of the present book is based upon quantum-field theory, and demonstrates that when the procedure is carried to all orders of perturbation theory, two-particle systems are fully compatible with the relativistically covariant Bethe-Salpeter equation. This procedure can be applied to arbitrary open-shell systems, in analogy with the standard many-body theory, and it is also applicable to systems with more than two particles. Presently existing theoretical procedures for treating atomic systems are, in several cases, insufficient to explain the accurate experimental data recently obtained, particularly for highly charged ions. This shortcoming is expected to be due to omission of combined QED-correlational effects, included in the new unified procedure.

All methods treated in Relativistic Many-Body Theory are illustrated with numerical examples. The main text is divided into three parts.

Ingvar Lindgren is also the author of the highly-cited "Atomic Many-Body Theory" book published by Springer.