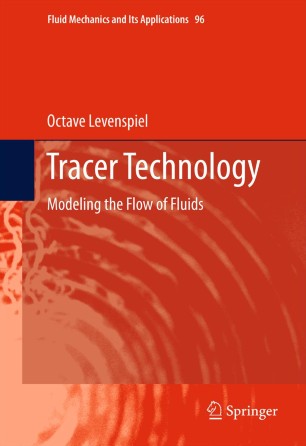 Modeling the Flow of Fluids

Part of the Fluid Mechanics and Its Applications book series (FMIA, volume 96)

A vessel’s behavior as a heat exchanger, absorber, reactor, or other process unit is dependent upon how fluid flows through the vessel.  In early engineering, the designer would assume either plug flow or mixed flow of the fluid through the vessel.  However, these assumptions were oftentimes inaccurate, sometimes being off by a volume factor of 100 or more.  The result of this unreliable figure produced ineffective products in multiple reaction systems.

Tracer Technology – Modeling the Flow of Fluids discusses how tracers are used to follow the flow of fluids, and how a variety of models are developed to represent these flows.

Octave Levenspiel is Professor Emeritus of Chemical Engineering at Oregon State University.  His primary interest is chemical reaction engineering, focusing largely on applying chemical reaction kinetics and physics to the design of chemical reactors.  His work has been recognized with awards that include the R.H. Wilhelm award (AIChE), the W.K. Lewis award (AIChE), and the P.V. Danckwerts award (IChemE).  His previous books, including Chemical Reaction Engineering, The Chemical Reactor Omnibook, and Engineering Flow and Heat Exchange, are widely used in industry and teaching, and have been translated into 12 foreign languages.