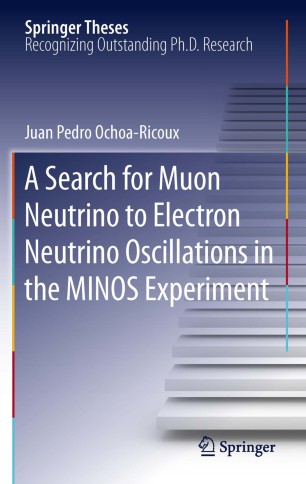 A Search for Muon Neutrino to Electron Neutrino Oscillations in the MINOS Experiment is a tour de force that summarizes, clearly and in some depth, much of Ochoa’s vast body of work which has had a major impact on MINOS. The centerpiece of the thesis is the search for muon neutrino to electron neutrino oscillations, which would indicate a non-zero mixing angle between the first and third neutrino generations (θ13), currently the “holy grail” of neutrino physics.  The optimal extraction of the electron neutrino oscillation signal is based on the novel “library event matching” (LEM) method which Ochoa developed and implemented together with colleagues at Caltech and at Cambridge, which improves MINOS’ reach for establishing an oscillation signal over any other method. LEM will now be the basis for MINOS’ final results, and will likely keep MINOS at the forefront of this field until it completes its data taking in 2011. Ochoa and his colleagues also developed the successful plan to run MINOS with a beam tuned for antineutrinos, to make a sensitive test of CPT symmetry by comparing the inter-generational mass splitting for neutrinos and antineutrinos. Ochoa’s in-depth, creative approach to the solution of a variety of complex experimental problems is an outstanding example for graduate students and longtime practitioners of experimental physics alike. Some of the most exciting results in this field to emerge in the near future may find their foundations in this thesis, for which Ochoa was awarded the National Prize for Youth of Mexico in 2009.

This Doctoral Thesis has been accepted by California Institute of Technology, Pasadena, USA.