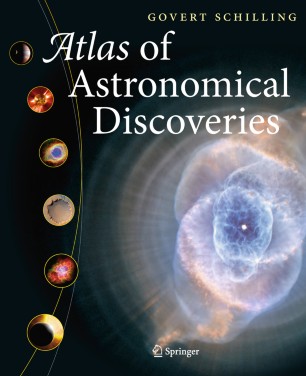 Four hundred years ago in Middelburg, in the Netherlands, the telescope was invented. The invention unleashed a revolution in the exploration of the universe. Galileo Galilei discovered mountains on the Moon, spots on the Sun, and moons around Jupiter. Christiaan Huygens saw details on Mars and rings around Saturn. William Herschel discovered a new planet and mapped binary stars and nebulae. Other astronomers determined the distances to stars, unraveled the structure of the Milky Way, and discovered the expansion of the universe. And, as telescopes became bigger and more powerful, astronomers delved deeper into the mysteries of the cosmos. In his Atlas of Astronomical Discoveries, astronomy journalist Govert Schilling tells the story of 400 years of telescopic astronomy. He looks at the 100 most important discoveries since the invention of the telescope.

In his direct and accessible style, the author takes his readers on an exciting journey encompassing the highlights of four centuries of astronomy. Spectacular photographs, taken with the largest telescopes on Earth and in space, portray the most distant corners of the universe.

"Selecting and describing the hundred most impressive and important astronomical discoveries is no easy task, but no one can master this feat as well as Govert Schilling, a veritable master of science communication. With captivating words and breathtaking images, the Atlas of Astronomical Discoveries is a tour-de-force of humankind’s almost unbelievable progress in understanding the cosmos over the past 400 years."
Lars Lindberg Christensen, Head of ESO’s Education and Public Outreach Department and author of Cosmic Collisions (Springer 2009)