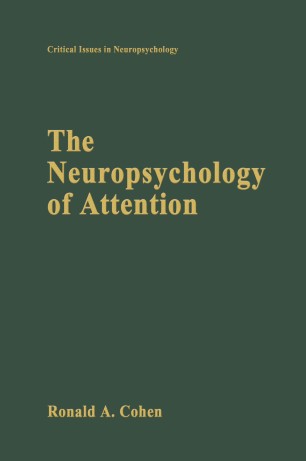 The Neuropsychology of Attention

As you read this, you are probably unaware of how your left foot feels in your shoe. Although your brain was receiving sensory input from this foot, you were not aware of your foot because you were reading and not attending to it. However, this discussion led you to move your attention to your left foot and to become aware of it. When I was a medical student, I saw a patient who was unaware of both the left side of his body and the left side of his environment. Unlike people in normal health, who when instructed can become aware of the left side of the body; this patient could not be made aware of his left arm or the left side of his environment. The patient's defect was so profound that despite being hungry he was unaware of food on the left side of his tray and did not recognize that his left arm belonged to him. This left-sided body and spatial unawareness could not be accounted for by a primary sensory defect. Although I knew that this man suffered from a large right-hemisphere stroke, I did not know the brain mechanisms that accounted for this profound example of unawareness. It was not until I had almost completed my neurology training in 1969 that I was able to return to this problem. At that time, most neuropsychological research was directed at understanding the language disorders associated with brain disease.