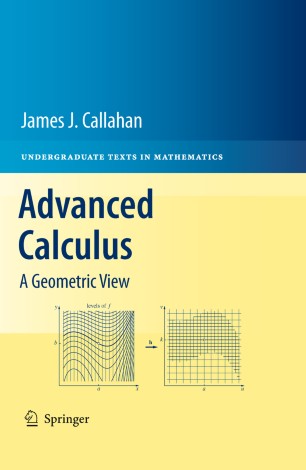 With a fresh geometric approach that incorporates more than 250 illustrations, this textbook sets itself apart from all others in advanced calculus. Besides the classical capstones--the change of variables formula, implicit and inverse function theorems, the integral theorems of Gauss and Stokes--the text treats other important topics in differential analysis, such as Morse's lemma and the Poincaré lemma. The ideas behind most topics can be understood with just two or three variables. This invites geometric visualization; the book incorporates modern computational tools to give visualization real power. Using 2D and 3D graphics, the book offers new insights into fundamental elements of the calculus of differentiable maps, such as the role of the derivative as the local linear approximation to a map and its role in the change of variables formula for multiple integrals. The geometric theme continues with an analysis of the physical meaning of the divergence and the curl at a level of detail not found in other advanced calculus books. Advanced Calculus: A Geometric View is a textbook for undergraduates and graduate students in mathematics, the physical sciences, and economics. Prerequisites are an introduction to linear algebra and multivariable calculus. There is enough material for a year-long course on advanced calculus and for a variety of semester courses--including topics in geometry. It avoids duplicating the material of real analysis. The measured pace of the book, with its extensive examples and illustrations, make it especially suitable for independent study.