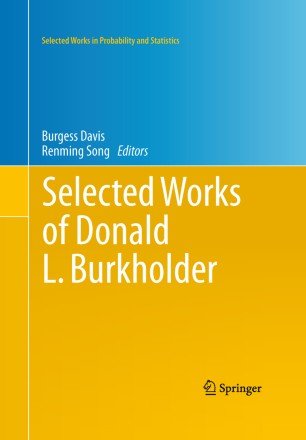 This book chronicles Donald Burkholder's thirty-five year study of martingales and its consequences. Here are some of the highlights. Pioneering work by Burkholder and Donald Austin on the discrete time martingale square function led to Burkholder and Richard Gundy's proof of inequalities comparing the quadratic variations and maximal functions of continuous martingales, inequalities which are now indispensable tools for stochastic analysis. Part of their proof showed how novel distributional inequalities between the maximal function and quadratic variation lead to inequalities for certain integrals of functions of these operators. The argument used in their proof applies widely and is now called the Burkholder-Gundy good lambda method. This uncomplicated and yet extremely elegant technique, which does not involve randomness, has become important in many parts of mathematics. The continuous martingale inequalities were then used by Burkholder, Gundy, and Silverstein to prove the converse of an old and celebrated theorem of Hardy and Littlewood. This paper transformed the theory of Hardy spaces of analytic functions in the unit disc and extended and completed classical results of Marcinkiewicz concerning norms of conjugate functions and Hilbert transforms. While some connections between probability and analytic and harmonic functions had previously been known, this single paper persuaded many analysts to learn probability. These papers together with Burkholder's study of martingale transforms led to major advances in Banach spaces. A simple geometric condition given by Burkholder was shown by Burkholder, Terry McConnell, and Jean Bourgain to characterize those Banach spaces for which the analog of the Hilbert transform retains important properties of the classical Hilbert transform. Techniques involved in Burkholder's usually successful pursuit of best constants in martingale inequalities have become central to extensive recent research into two well- known open problems, one involving the two dimensional Hilbert transform and its connection to quasiconformal mappings and the other a conjecture in the calculus of variations concerning rank-one convex and quasiconvex functions. This book includes reprints of many of Burkholder's papers, together with two commentaries on his work and its continuing impact.