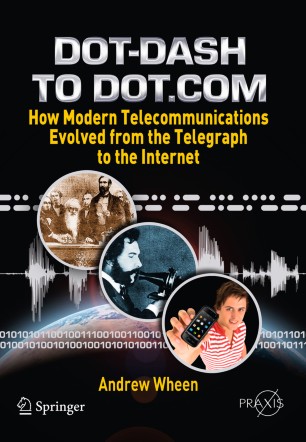 How Modern Telecommunications Evolved from the Telegraph to the Internet

The profusion of websites and applications that characterise the modern Internet may seem a far cry from the primitive telegraph system of the late 1830s. There is, however, a direct link. The invention of the electric telegraph paved the way for telephone networks which, in turn, laid the foundations for today's Internet. In less than 170 years, simple arrangements of magnets, switches and cables evolved to become the largest and most complex machine in the world. How did this happen? What were the inventions that shaped modern communications? Who were the key players in this amazing story? How does the Internet work? And what is coming next? This fascinating and long-overdue book answers these and many other questions, bringing to life the characters, the times they live in, and the technological revolution that they brought about. Dot-Dash to Dot.com: - describes some truly heroic feats of 19th century engineering, and the impact that the first telecommunication systems had on the Victorian world; - reveals how the success of the electric telegraph led to the development of the telephone and the fax machine; - explores the early experiments that led to the Internet and the World Wide Web; - explains how networks work - and why they sometimes don't; - chronicles the phenomenal growth of mobile networks; - describes how the digital revolution is driving the introduction of "next generation networks;" - examines the extraordinary growth in network applications; and - introduces a number of larger-than-life characters, whose inventive genius and entrepreneurial flair left an indelible mark on the modern world.