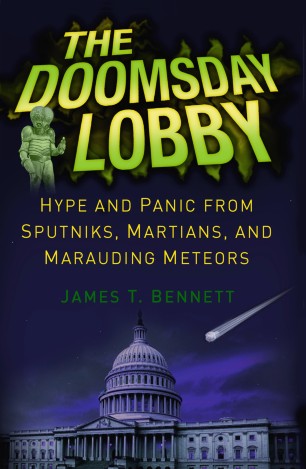 Hype and Panic from Sputniks, Martians, and Marauding Meteors

From the race-to-space in the 1950s to the current furor over global warming, James Bennett traces the subtle and not-so-subtle ways in which government has co-opted scientific research and reinforced a culture in which challengers to proscribed wisdom are frozen out. Ripped from the headlines, Bennett offers a compelling, entertaining, and thought-provoking perspective on political influence in scientific research and its implications for a democratic society. Praise for The Doomsday Lobby "During the Nineteenth Century, almost entirely on private funding, American science grew from practically nothing to world class. Now, however, over fifty percent of American science is funded by the federal government. Dr. Bennett traces the path, "crisis" after "crisis," by which American science became practically an arm of the federal government. His tale is a cautionary one, warning against future "crisis mongers" who would extend the government's already majority control of American science even further. His warning is a timely one, and it should be heeded." Joseph P. Martino, author of Science Funding: Politics and Porkbarrel "Bennett's latest book offers a challenging interpretation of the rise of the American federal science establishment since World War II. Focusing primarily on the growth of the space program, Bennett argues that crisis, real or imagined, is the source of state power and state funding for science. The Doomsday Lobby offers what no doubt will be viewed as a controversial contribution to the history of American science policy, and more broadly to an understanding of the role of the state in society." James D. Savage, Professor of Politics, University of Virginia, and author of Funding Science in America James T. Bennett is Eminent Scholar and William P. Snavely Professor of Political Economy and Public Policy at George Mason University, and Director of The John M. Olin Institute for Employment Practice and Policy. He is the author or editor of over a dozen books, including Unhealthy Charities, The Politics of American Feminism, Stifling Political Competition, and Not Invited to the Party.