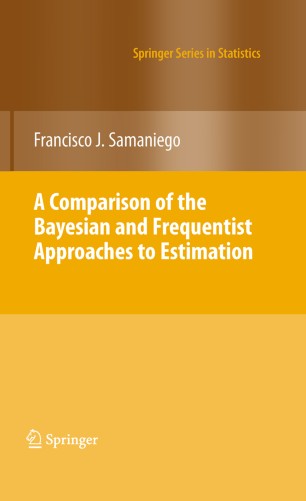 A Comparison of the Bayesian and Frequentist Approaches to Estimation

This monograph contributes to the area of comparative statistical inference. Attention is restricted to the important subfield of statistical estimation. The book is intended for an audience having a solid grounding in probability and statistics at the level of the year-long undergraduate course taken by statistics and mathematics majors. The necessary background on Decision Theory and the frequentist and Bayesian approaches to estimation is presented and carefully discussed in Chapters 1–3. The “threshold problem” -- identifying the boundary between Bayes estimators which tend to outperform standard frequentist estimators and Bayes estimators which don’t -- is formulated in an analytically tractable way in Chapter 4. The formulation includes a specific (decision-theory based) criterion for comparing estimators. The centerpiece of the monograph is Chapter 5 in which, under quite general conditions, an explicit solution to the threshold is obtained for the problem of estimating a scalar parameter under squared error loss. The six chapters that follow address a variety of other contexts in which the threshold problem can be productively treated. Included are treatments of the Bayesian consensus problem, the threshold problem for estimation problems involving of multi-dimensional parameters and/or asymmetric loss, the estimation of nonidentifiable parameters, empirical Bayes methods for combining data from ‘similar’ experiments and linear Bayes methods for combining data from ‘related’ experiments. The final chapter provides an overview of the monograph’s highlights and a discussion of areas and problems in need of further research. F. J. Samaniego is a Distinguished Professor of Statistics at the University of California, Davis. He served as Theory and Methods Editor of the Journal of the American Statistical Association (2003-05), was the 2004 recipient of the Davis Prize for Undergraduate Teaching and Scholarly Achievement, and is an elected Fellow of the ASA, the IMS and the RSS and an elected Member of the ISI.