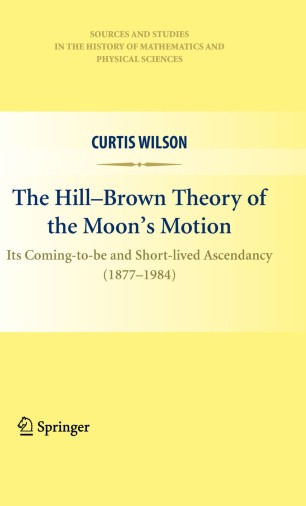 The Hill-Brown Theory of the Moon’s Motion

The Hill–Brown theory of lunar motion was, from its completion in 1908 to its retirement in 1984, the most accurate model of the moon’s orbit. The mathematical, philosophical, and historical interest in the analytic solution of the lunar problem using the Hill–Brown method still engages celestial mechanicians, and is the primary focus of this work. This book, in three parts, describes three phases in the development of the modern theory and calculation of the Moon's motion. Part I explains the crisis in lunar theory in the 1870s that led G.W. Hill to lay a new foundation for an analytic solution, a preliminary orbit he called the "variational curve." Part II is devoted to E.W. Brown's completion of the new theory as a series of successive perturbations of Hill's variational curve. Part III describes the revolutionary developments in time-measurement and the determination of Earth-Moon and Earth-planet distances that led to the replacement of the Hill–Brown theory in 1984. Although some calculus and differential equations are included, the text is largely accessible without advanced knowledge in these areas. Amateurs of astronomy, as well as instructors and scholars of the general history of science, will find this book of significant interest.