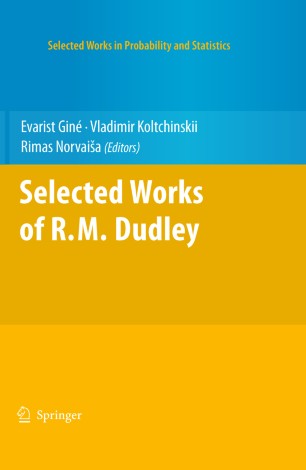 For almost fifty years, Richard M. Dudley has been extremely influential in the development of several areas of Probability. His work on Gaussian processes led to the understanding of the basic fact that their sample boundedness and continuity should be characterized in terms of proper measures of complexity of their parameter spaces equipped with the intrinsic covariance metric. His sufficient condition for sample continuity in terms of metric entropy is widely used and was proved by X. Fernique to be necessary for stationary Gaussian processes, whereas its more subtle versions (majorizing measures) were proved by M. Talagrand to be necessary in general.

Together with V. N. Vapnik and A. Y. Cervonenkis, R. M. Dudley is a founder of the modern theory of empirical processes in general spaces. His work on uniform central limit theorems (under bracketing entropy conditions and for Vapnik-Cervonenkis classes), greatly extends classical results that go back to A. N. Kolmogorov and M. D. Donsker, and became the starting point of a new line of research, continued in the work of Dudley and others, that developed empirical processes into one of the major tools in mathematical statistics and statistical learning theory.

As a consequence of Dudley's early work on weak convergence of probability measures on non-separable metric spaces, the Skorohod topology on the space of regulated right-continuous functions can be replaced, in the study of weak convergence of the empirical distribution function, by the supremum norm. In a further recent step Dudley replaces this norm by the stronger p-variation norms, which then allows replacing compact differentiability of many statistical functionals by Fréchet differentiability in the delta method.

Richard M. Dudley has also made important contributions to mathematical statistics, the theory of weak convergence, relativistic Markov processes, differentiability of nonlinear operators and several other areas of mathematics.

Professor Dudley has been the adviser to thirty PhD's and is a Professor of Mathematics at the Massachusetts Institute of Technology.