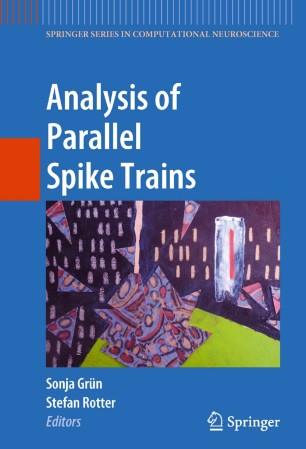 Action potentials, or spikes, are the most salient expression of neuronal processing in the active brain, and they are likely an important key to understanding the neuronal mechanisms of behavior. However, it is the group dynamics of large networks of neurons that is likely to underlie brain function, and this can only be appreciated if the action potentials from multiple individual nerve cells are observed simultaneously. Techniques that employ multi-electrodes for parallel spike train recordings have been available for many decades, and their use has gained wide popularity among neuroscientists. To reliably interpret the results of such electrophysiological experiments, solid and comprehensible data analysis is crucial. The development of data analysis methods, though, has not really kept pace with the advances in recording technology. Neither general concepts, nor statistical methodology seem adequate for the new experimental possibilities. Promising approaches are scattered across journal publications, and the relevant mathematical background literature is buried deep in journals of different fields. Compiling a useful reader for students or collaborators is both laborious and frustrating. This situation led us to gather state-of-the-art methodologies for analyzing parallel spike trains into a single book, which then might serve as a vantage point for current techniques and a launching point for future development. To our knowledge, this is the first textbook with an explicit focus on the subject. It contains 20 chapters, each of them written by selected experts in the field.

About the Editors:
Sonja Grün, born 1960, received her MSc (University of Tübingen and Max-Planck Institute for Biological Cybernetics) and PhD (University of Bochum, Weizmann Institute of Science in Rehovot) in physics (theoretical neuroscience), and her Habilitation (University of Freiburg) in neurobiology and biophysics. During her postdoc at the Hebrew University in Jerusalem, she performed multiple single-neuron recordings in behaving monkeys. Equipped with this experience she returned back to computational neuroscience to further develop analysis tools for multi-electrode recordings, first at the Max-Planck Institute for Brain Research in Frankfurt/Main and then as an assistant professor at the Freie Universität in Berlin associated with the local Bernstein Center for Computational Neuroscience. Since 2006 she has been unit leader for statistical neuroscience at the RIKEN Brain Science Institute in Wako-Shi, Japan. Her scientific work focuses on cooperative network dynamics relevant for brain function and behavior. Stefan Rotter, born 1961, holds a MSc in Mathematics, a PhD in Physics and a Habilitation in Biology. Since 2008, he has been Professor at the Faculty of Biology and the Bernstein Center Freiburg, a multidisciplinary research institution for Computational Neuroscience and Neurotechnology at Albert-Ludwig University Freiburg. His research is focused on the relations between structure, dynamics, and function in spiking networks of the brain. He combines neuronal network modeling and spike train analysis, often using stochastic point processes as a conceptual link.