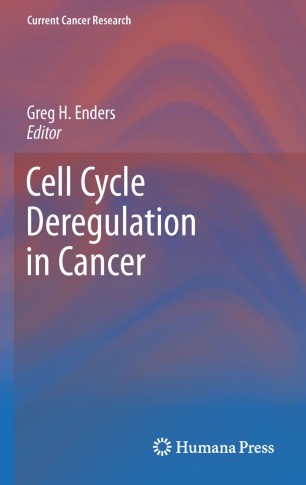 Modern studies of regulation of the cell division cycle were pioneered by Leland Hartwell, Paul Nurse, and Tim Hunt in yeast and marine invertebrates. This work identified proteins termed cyclins that fluxuate in abundance during progression through the cycle and partner with Cyclin dependent kinases (Cdks) to drive major cell cycle transitions. Much has been learned since about how these and other proteins control cell cycle progression in all eukaryotes, including man. Further research is uncovering how these controls are de-regulated in cancer, a disease of unbridled cell proliferation that is the leading cause of death in developed countries. However, there is much more to be learned, and the hard won gains are just beginning to impact cancer care. In 11 reviews by leading experts, this volume lays out the current state and directions of the field for biomedical scientists of all training levels.

The collection begins with three reviews that delineate how cells initiate the cell cycle, from growth factor stimulation to activation of key transcription programs and origins of DNA replication. The next three reviews address issues of proliferation under duress, including how derangement of mitotic checkpoints can lead to cell death or genetic instability and how recycling of intracellular molecules (autophagy) is regulated. The next three reviews address the special context of long-term proliferation—how it is regulated in stem cells, how it can erode telomeric structures on the tips of chromosomes, and how it can culminate in senescence. The last two reviews describe how cell cycle advances are beginning to touch patients, in the characterization of pre-malignant states and in cancer therapy.