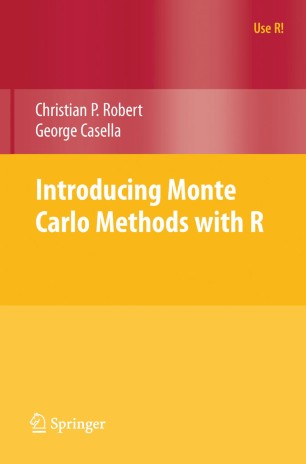 Part of the Use R book series (USE R)

Computational techniques based on simulation have now become an essential part of the statistician's toolbox. It is thus crucial to provide statisticians with a practical understanding of those methods, and there is no better way to develop intuition and skills for simulation than to use simulation to solve statistical problems. Introducing Monte Carlo Methods with R covers the main tools used in statistical simulation from a programmer's point of view, explaining the R implementation of each simulation technique and providing the output for better understanding and comparison. While this book constitutes a comprehensive treatment of simulation methods, the theoretical justification of those methods has been considerably reduced, compared with Robert and Casella (2004). Similarly, the more exploratory and less stable solutions are not covered here.

This book does not require a preliminary exposure to the R programming language or to Monte Carlo methods, nor an advanced mathematical background. While many examples are set within a Bayesian framework, advanced expertise in Bayesian statistics is not required. The book covers basic random generation algorithms, Monte Carlo techniques for integration and optimization, convergence diagnoses, Markov chain Monte Carlo methods, including Metropolis {Hastings and Gibbs algorithms, and adaptive algorithms. All chapters include exercises and all R programs are available as an R package called mcsm. The book appeals to anyone with a practical interest in simulation methods but no previous exposure. It is meant to be useful for students and practitioners in areas such as statistics, signal processing, communications engineering, control theory, econometrics, finance and more. The programming parts are introduced progressively to be accessible to any reader.

Christian P. Robert is Professor of Statistics at Université Paris Dauphine, and Head of the Statistics Laboratory of CREST, both in Paris, France. He has authored more than 150 papers in applied probability, Bayesian statistics and simulation methods. He is a fellow of the Institute of Mathematical Statistics and the recipient of an IMS Medallion. He has authored eight other books, including The Bayesian Choice which received the ISBA DeGroot Prize in 2004, Monte Carlo Statistical Methods with George Casella, and Bayesian Core with Jean-Michel Marin. He has served as Joint Editor of the Journal of the Royal Statistical Society Series B, as well as an associate editor for most major statistical journals, and was the 2008 ISBA President.

George Casella is Distinguished Professor in the Department of Statistics at the University of Florida. He is active in both theoretical and applied statistics, is a fellow of the Institute of Mathematical Statistics and the American Statistical Association, and a Foreign Member of the Spanish Royal Academy of Sciences. He has served as Theory and Methods Editor of the Journal of the American Statistical Association, as Executive Editor of Statistical Science, and as Joint Editor of the Journal of the Royal Statistical Society Series B. In addition to books with Christian Robert, he has written Variance Components, 1992, with S.R. Searle and C.E. McCulloch; Statistical Inference, Second Edition, 2001, with Roger Berger; and Theory of Point Estimation, Second Edition, 1998, with Erich Lehmann. His latest book is Statistical Design 2008.