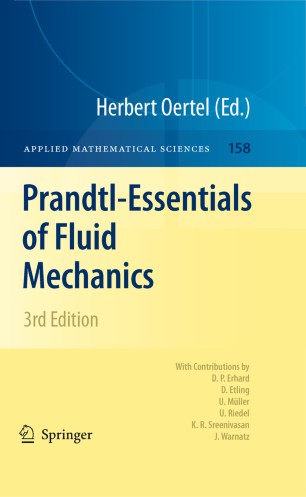 Ludwig Prandtl, with his fundamental contributions to hydrodynamics, aerodynamics and gasdynamics, greatly influenced the development of fluid mechanics as a whole and it was his pioneering research in the first half of the 20th century that founded modern fluid mechanics. His book `Fuhrer durch die Stromungslehre’ or `Essentials of Fluid Mechanics’ appeared in 1942. Even today it is considered one of the most important books in the area.

It is based on the 12th German edition with additional material included. All Chapters have been revised and extended, and there are new chapters on fluid mechanical instabilities and turbulence, microflows and biofluid mechanics.

Essentials of Fluid Mechanics is aimed at science and engineering students and researchers wishing to obtain an overview of the different branches of fluid mechanics. The book is extensively illustrated throughout and includes problems to aid learning in many chapters.

The range of topics considered in this volume is impressive and physical ideas and principles described and illustrated by a wide range of examples will make this book interesting to students and specialists in various fields.