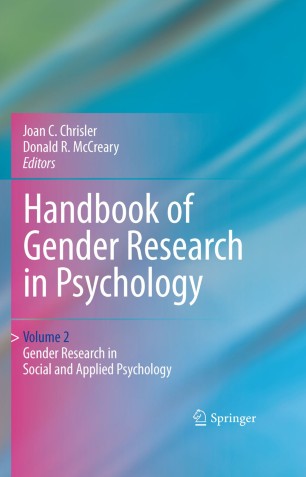 Handbook of Gender Research in Psychology

The study of gender and gender roles has made significant advances since the 1960s, and this is particularly evident in the areas of social and applied psychology. Volume 2 of the Handbook of Gender Research in Psychology focuses on these aspects of psychology, acknowledging the vitality of the field and reviewing theories and findings from across the specialties, including many outside traditional areas of gender research.

The book’s major goals—better communication between researchers, identification and addressing of knowledge gaps, elimination of bias in research and treatment—are exemplified in a series of chapters that inform readers about the current state of gender research. Authors discuss topics such as the ongoing gender issues in personality assessment, the role of gender in developing and maintaining relationships, and controversies such as whether a male practitioner can be a feminist therapist and whether the concept of gender identity disorder is outdated.

Volume 2 of the Handbook of Gender Research in Psychology covers these critical areas:

Blending the challenging with the accessible, Handbook of Gender Research in Psychology: Gender Research in Social and Applied Psychology is a reference of the first order for researchers, a practice-enhancing resource for clinical psychologists and other therapists, and an exceedingly useful text for the professor or graduate student.

Joan C. Chrisler is Class of 1943 Professor of Psychology at Connecticut College. She has published extensively on gender roles, attitudes toward menstruation and menopause, women's health and embodiment, and other topics. She has edited seven previous books, most recently Lectures on the Psychology of Women (4th ed., 2008, McGraw-Hill) and Women over 50: Psychological Perspectives (2007, Springer). She has served as Editor of Sex Roles and on the Editorial Boards of Psychology of Women Quarterly, Sex Roles, and Teaching of Psychology. Dr. Chrisler is a Fellow of the Association for Psychological Science and the American Psychological Association (Divisions 1, 2, 9, 35, 38, 46, 52).

Donald R. McCreary is an Adjunct Professor of Psychology at Brock University and York University.  He has published extensively on gender roles, the psychology of men, and other topics.  He has co-edited one previous book, Applied Social Psychology (1997, Prentice Hall).  He has served as Associate Editor of Psychology of Men and Masculinity and of the International Journal of Men's Health, and is a member of the Editorial Boards of Sex Roles, Journal of Men's Studies, and Body Image. Dr. McCreary is a Fellow of the American Psychological Association (Division 51).