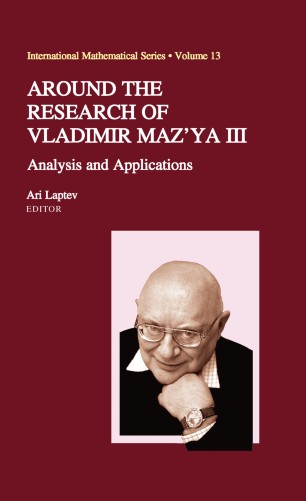 Around the Research of Vladimir Maz'ya III

More than 450 research articles and 20 books by Prof. Maz'ya contain numerous fundamental results and fruitful techniques which have strongly influenced the development of many branches in Analysis and, in particular, the topics discussed in this volume: problems with biharmonic differential operators, the minimal thinness of nontangentially accessible domains, the Lp-dissipativity of partial differential operators and the Lp-contractivity of the generated semigroups, uniqueness and nonuniqueness in inverse hyperbolic problems and the existence of black (white) holes, global exponential bounds for Green's functions for differential and integral equations with possibly singular coefficients, data, and boundaries of the domains, properties of spectral minimal partitions, the boundedness of integral operators from Besov spaces on the boundary of a Lipschitz domain into weighted Sobolev spaces of functions in the domain, the Cwikel-Lieb-Rozenblum and Lieb-Thirring inequalities for operators on functions in metric spaces, spectral problems with the Schrodinger operator, the Weyl formula for the Laplace operator on a domain under minimal assumptions on the boundary, a degenerate oblique derivative problem for second order uniformly elliptic operators, weighted inequalities with the Hardy operator in the integral and supremum form, finite rank Toeplitz operators and applications, the resolvent of a non-selfadjoint pseudodifferential operator.

Ari Laptev
Imperial College London (UK) and
Royal Institute of Technology (Sweden)
Ari Laptev is a world-recognized specialist in Spectral Theory of
Differential Operators. He is the President of the European Mathematical
Society for the period 2007- 2010.

Tamara Rozhkovskaya
Sobolev Institute of Mathematics SB RAS (Russia)
and an independent publisher
Editors and Authors are exclusively invited to contribute to volumes highlighting
recent advances in various fields of mathematics by the Series Editor and a founder
of the IMS Tamara Rozhkovskaya.