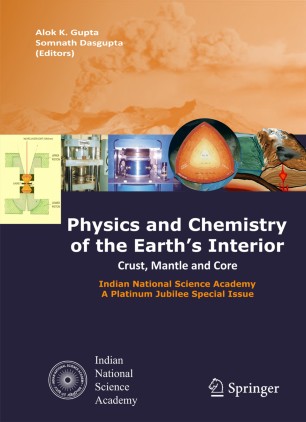 Physics and Chemistry of the Earth’s Interior

The Indian National Science Academy was established in January 1935 with the objective of promoting science in India and harnessing scientific knowledge for the cause of humanity and national welfare. In 1968 it was designated as the adhering organisation in India to the International Council for Scientific Union (ICSU) on behalf of the Government of India. Over the years, the Academy has published a number of journals, volumes, biographical memoirs, etc. The year 2009–2010 will be specially celebrated to mark the Platinum Jubilee of the Academy. Many programmes are planned in different centres in India on this occasion. In addition, the Academy has decided to publish a number of special volumes on different s- jects ranging from earth sciences to life sciences. This volume is on Physics and Chemistry of the Earth’s Interior. One of the main objectives of geophysicists is to establish the internal structure of the earth as revealed by seismic tomography. It is also their primary goal to correlate geophy- cal data to reveal thermal and chemical state of the crust, mantle and core of the earth. In - der to interpret seismic velocities and associated density and elastic properties in terms of mineralogical and petrological models of the earth’s interior, thermodynamic and hi- pressure temperature data from mineral physics are essential. With the advent of different types of multi-anvil and laser-heated diamond anvil equipment, it is now possible to simulate conditions prevalent even in the lower mantle and core of the earth.