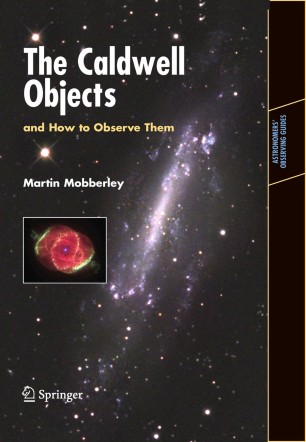 The Caldwell Objects and How to Observe Them

There have been only a handful of famous deep sky "catalogs," including Charles Messier’s, which was the first and remains the most famous. Messier was a comet hunter, and in the late 1700s he published a list of 109 objects in the sky that were not comets.

In December 1995, Sky & Telescope published a list of deep sky objects sent to them by British amateur astronomer extraordinare, Sir Patrick Moore (officially, Sir Patrick Caldwell-Moore). It was a huge hit! Sir Patrick may be the most prolific authors of astronomy books for all time and has been presenting the BBC Sky at Night television series since April 1957. Moore’s list contained 109 non-Messier objects that were Patrick’s favorites, many of them visible only in the southern hemisphere. Accompanying the list of objects were long exposure black and white and color photographs of some of these objects.

In this book Martin Mobberley, who has known Sir Patrick Moore for many years, describes these objects and tells how to locate them. He discusses the best ways to visually observe them and image them. He also tells a little of Moore’s life and observing practices and how he made his choices for the "catalog."

If you’re wanting a challenge for your newly acquired telescope, or are interested in seeing what others have highlighted as some of the greatest sights in the night sky, this book will set you on the path of discovery.