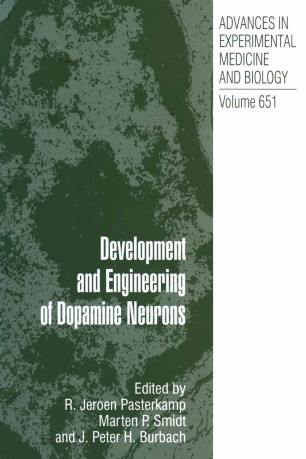 Development and Engineering of Dopamine Neurons

Part of the Advances in Experimental Medicine and Biology book series (AEMB, volume 651)

Theneurotransmitter dopamine has just celebrated its 50thbirthday. The discovery of dopamine as a neuronal entity in the late 1950s and the notion that it serves in neurotransmission has been a milestone in the field of neuroscience research. This milestone marked the beginning of an era that explored the brain as an integrated collection of neuronal systems that one could distinguish on basis of neurotransm- ter identities, and importantly, in which one started to be able to pinpoint the seat of brain disease. The mesodiencephalic dopaminergic (mdDA) system, previously designated as midbraindopaminergic system, has received much attention since its discovery. The initial identification of dopamine as a neurotransmitter in the central nervous system (CNS) and its relevance to psychiatric and neurological disorders have stimulated a plethora of neurochemical, pharmacological and genetic studies into the function of dopamine neurons and theirprojections. In the last decade, studies on gene expression and development have further increased the knowledge of this neuronal population and have unmasked a new level of complexity. The start of the molecular dissection of the mdDA system has been marked by the cloning and characterization ofNurrl and Pitx3. These transcription factors were shown to have a critical function during mdDA development. These initial studies have been followed by the identification of many other proteins, which have a crucial function in the creation of a dopamine neuron permissive region, induction of precursors, induction of terminaldifferent- tion and finally maintenance of the mdDA neuronal pool.