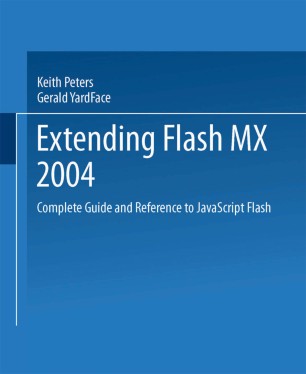 With the release of Flash MX 2004, Macromedia gave us a brand-new Extensibility architecture layer, which let us look under the hood of Flash and extend its functionality. With the extensibility tools, which include behaviors, custom-made tools and commands, the JavaScript API (or JSFL), and the XML-to-UI API, you can literally extend Flash to do things it cannot do out of the box. Things such as adding new custom commands to the menu and customizing the tool bar, adding brand new, custom created tools. The commands could be as simple as drawing a commonly used shape on the stage, or as complex as creating an entire new Flash movie from scratch.

These features not only allow users to share code and effects more easily within the community or a production environment, but will also allow developers to package up and reuse more within Flash than was ever possible before, increasing productivity and decreasing production times. We now have the ability to take our designs further than ever before—if you have an idea for a new feature, you can just create it yourself and “plug it in”. This is the future of Flash!

Extending Macromedia Flash MX 2004 covers the entire spectrum of the extensibility architecture in Flash MX 2004. It includes in-depth tutorials on each new area—commands, tools, timeline effects, behaviors, use of the MMExecute command, executing Flash from the command line, and full coverage of XML to UI, which enables you to easily create custom user interfaces for your Flash Extensions. The final section of this book contains a comprehensive desktop reference to JavaScript Flash (JSFL), the new language that you'll use to create your Flash extensions.