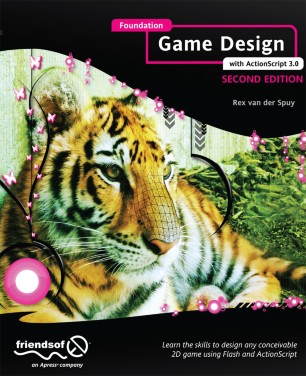 In response to the success of the first edition of Foundation Game Design with Flash, Rex van der Spuy has revised and updated all the code to meet current programming best practices, and the focus is now on accurate ActionScript 3.0, regardless of the IDE that you use.

We’ve all sneaked the odd five minutes here or there playing the latest Flash game that someone sent around the office, but creating those games is trickier than it looks. The aim of Foundation Game Design with ActionScript 3.0 is to take you, even if you’ve minimal multimedia or programming experience, through a series of step-by-step examples and detailed case studies—to the point where you'll have the skills to independently design any conceivable 2D game using Flash and ActionScript.

Foundation Game Design with ActionScript 3.0 is a non-technical one-stop shop for all the most important skills and techniques a beginning game designer needs to build games with Flash from scratch. Whether you're creating quick blasts of viral amusement, or more in-depth action or adventure titles, this is the book for you.

Rex van der Spuy is a video game designer and writer. He s written Foundation Game Design with Flash, Advanced Game Design with Flash and Foundation Game Design with AS3.0. Rex has designed games and done interactive interface programming Agency Interactive (Dallas), Scottish Power (Edinburgh), DC Interact (London), Draught Associates (London), and the Bank of Montreal (Canada). He also builds game engines and interactive interfaces for museum installations for PixelProject (Cape Town). In addition, he created and taught advanced courses in game design for the Canadian School of India (Bangalore, India). When not writing about games, making them, or playing them, he amuses himself by building experimental, autonomous, self-aware, multi-cellular parallel universes out of shoe boxes, scotch tape, spare milk bottle caps and bits of string . He claims, that this is a lot more entertaining than you might think, but we re skeptical.