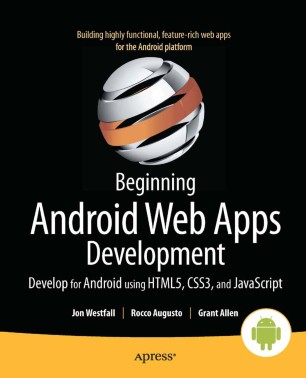 With Beginning Android Web Apps Development, you'll learn how to apply HTML5, CSS3, JavaScript, Ajax and other Web standards for use on the Android mobile platform, by building a variety of fun and visually stimulating games and other web applications! If you've done some basic web development, and you want to build your skills to create exceptional web apps, you'll find everything you seek in the discussions and examples in this book.

Each application you'll build in Beginning Android Web Application Development will show you solutions that you can apply to many of your own projects. Each example shares techniques and coding solutions that will inspire your own work. You'll learn how to tie your Android apps into Twitter through two apps that you'll build: Who's that Tweet?!, a quiz game based on celebrity accounts, and I Love Ham, a coding investigation into search phrases and rhyming.

Your Android web app development skills will then proceed in another direction, as you discover the power of HTML5 in two game apps: Scavenger Hunt, which introduces you to the HTML5 GPS location API, and Spies!, a location-based application that shows you how to use CSS3, Ajax, and HTML5 within multi-player environments. You'll also create an Android web application which checks the arrival time of buses and light-rails through the use of Portland, Oregon's open Tri-Met data API! This app is a great template for other apps you may want to build in the future, and showcases the important techniques for incorporating cloud-based apps into web games. After reading Beginning Android Web Apps Development, you will have built real apps and developed along the way the skills you'll need to create highly interactive, professional web applications... and, your journey will be engaging and enjoyable!

Jon Westfall is associate director for research and technology with the Center for Decision Sciences at Columbia Business School. As a researcher and technologist working in New York City, his work focuses on how individuals make economic and public policy decisions, as well as consumer behavior.?In addition to his research, he also maintains an active career in information technology, where he has worked as a consultant since 1997, founding his own firm,?Bug Jr. Systems. As a consultant, he has developed custom software solutions (including native Windows 32 applications, Windows .NET applications, ASP,?ASP.NET, and PHP web applications), and served as a senior network and systems architect and administrator (on both Windows and Unix networks, and hybrids). He also writes for the Thoughts Media Network, serving as executive editor of Android Thoughts, and news editor of Windows Phone Thoughts. He has been recognized as a Microsoft "Most Valuable Professional"?in Windows Mobile/Windows Phone since 2008, and holds a Ph.D. in cognitive experimental psychology.