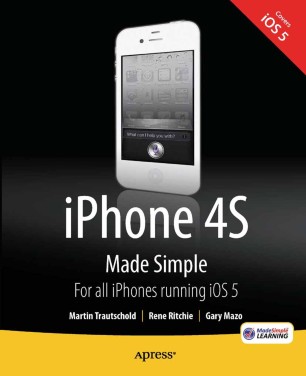 Congratulations—you've purchased the new iPhone 4S, the coolest smartphone on the market. Now it's time to learn how to take advantage of the new iOS 5 and all its features, apps, and secret techniques available.

To accomplish this, look no further than iPhone 4S Made Simple. More than 1,000 screen visuals and clear-cut instructions guide you through both basic and advanced features of the iPhone 4S, from email and calendar tips to navigating the App Store and understanding Bluetooth and Wi-Fi networks.

Written by two successful smartphone trainers and authors, this is the go-to guide for the latest and greatest version of the iPhone. This book should also help those who use the popular iPhone 4 or earlier iPhones, that are now running or can run the new iOS 5 operating system as well.

Martin Trautschold is the founder and chief executive officer of Made Simple Learning, a leading provider of Apple iPad, iPhone, iPod touch, BlackBerry and Palm webOS books and video tutorials. He has been a successful entrepreneur in the mobile device training and software business since 2001. With Made Simple Learning, he has been helping to train thousands of BlackBerry users with short, to-the-point video tutorials. He has now co-authored 15 Made Simple guide books. Martin also co-founded, ran for three years, then sold a mobile device software company. Prior to this, Martin spent 15 years in technology and business consulting in the U.S. and Japan. He holds an engineering degree from Princeton University and a master's in business administration from the Kellogg School at Northwestern University. Martin and his wife, Julia, have three daughters. Martin enjoys rowing and cycling. He can be reached at martin@madesimplelearning.com.