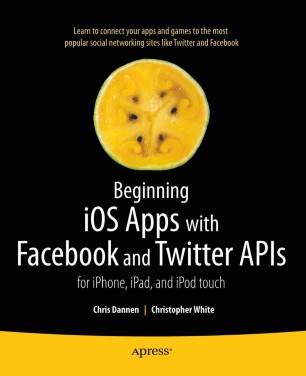 For iPhone, iPad, and iPod touch

Beginning iOS Apps with Facebook and Twitter APIs shows you how to add the power of social networking to your mobile apps on iPhone, iPad, and iPod touch. With this book as your guide, you can write apps that connect to Facebook and Twitter quickly, securely, and discreetly. Instead of starting from scratch, you will build on the vast resources, data storage capacity, and familiar features of these platforms which have become part of everyday life for hundreds of millions of users worldwide.

Beginning iOS Apps with Facebook and Twitter APIs introduces you to the development tools, techniques, and design practices you will need to work with the APIs. It helps you decide whether to use Facebook, Twitter, or both, and explains the important issues of design, branding, and permissible use guidelines. You will learn how to guarantee privacy and use OAuth for authentication and single sign-on.

From time to time, new forms of communication come along that make it easier for people to communicate and manage their social lives. Like phone calls and SMS before them, Facebook and Twitter have, in a short time, become essential parts of the social fabric of life for an ever-growing number of people throughout the world. The knowledge you'll gain from Beginning iOS Apps with Facebook and Twitter APIs will help you create exciting and popular iOS apps that your users will rely on every day to help make their lives more meaningful and connected.

Chris Dannen is a technology journalist for FastCompany magazine and CBS Interactive. He has authored one Apress book, iPhone Design Award-Winning Projects: The Definitive Guide, published in early 2010, and wrote Google Voice for Dummies (2009). He has also written for Inc., Rolling Stone, and Discover magazines. He has worked extensively with foursquare and Facebook in the past, including for his last Apress book, and also has good relationships with developers at Twitter. He holds a degree in English literature from the University of Virginia. He is based in Brooklyn, New York.