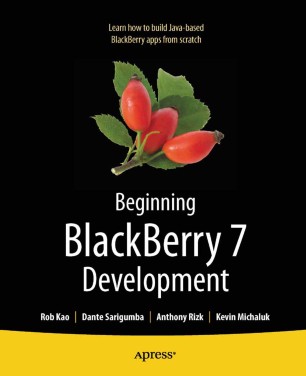 Assuming only some programming background in Java or a similar language, this book starts with the basics, offering step-by-step tutorials that take you through downloading and installing the BlackBerry development environment, creating your first apps, and exploring the BlackBerry APIs. You'll be introduced to the latest features available in the latest BlackBerry 7 using BlackBerry Java Plug-in for Eclipse, including BlackBerry Application Platform Services, techniques for using multimedia with the BlackBerry, and tools for increasing app performance.

To round out the complete development process, you'll also discover the different ways you can package and distribute your apps, from deploying apps on your own website to listing your apps for sale in the BlackBerry App World.

Anthony Rizk has been developing for BlackBerry since the very first models appeared in 2001. He is a cofounder of several mobile software companies, including Rove and Zeebu, and has consulted extensively in the BlackBerry application industry.