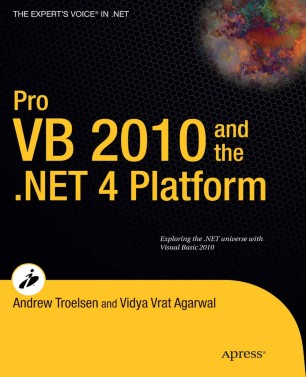 Be the first to understand .NET 4.0 and Visual Basic 2010. Pro VB 2010 and the .NET 4.0 Platform provides developers with a complete guide to the new technology, explaining the importance of all the key VB 2010 language features. This edition has been comprehensively revised and rewritten to make it accurately reflect the VB 10 language specification for the .NET 4.0 platform. You’ll find new chapters covering the important concepts of dynamic lookups, named and optional arguments, Parallel LINQ (PLINQ), improved COM interop, and variance for generics.

The first edition of this book was released at the 2001 Tech-Ed conference in Atlanta, Georgia. At that time, the .NET platform was still a beta product, and in many ways, so was this book. This is not to say that the early editions of this text did not have merit—after all, the book was a 2002 Jolt Award finalist and it won the 2003 Referenceware Excellence Award. However, over the years that author Andrew Troelsen spent working with the common language runtime (CLR), he gained a much deeper understanding of the .NET platform and the subtleties of the VB programming language, and he feels that this sixth edition of the book is as close to a “final release” as he’s come yet!

If you’re checking out this book for the first time, do understand that it’s targeted at experienced software professionals and/or graduate students of computer science (so don’t expect three chapters on iteration or decision constructs!). The mission of this text is to provide you with a rock-solid foundation in the VB programming language and the core aspects of the .NET platform (assemblies, remoting, Windows Forms, Web Forms, ADO.NET, XML web services, etc.). Once you digest the information presented in these 25 chapters, you’ll be in a perfect position to apply this knowledge to your specific programming assignments and explore the .NET universe on your own terms.