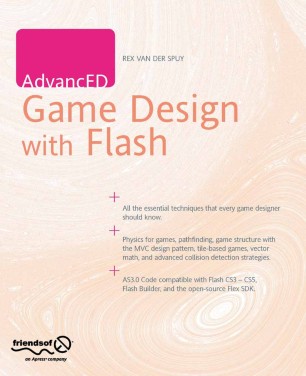 Creating games in Flash is a never-ending journey of exploration, learning, and most of all, fun. Once you’ve mastered the basics, a new world is opened up to you, enabling you to take your existing skills to the next level and discover new skills that will in turn open new doors. This book is a direct continuation of Foundation Game Design with Flash, and is a complete point-by-point roundup of the most important skills a Flash game designer needs to know. You’ll increase your ActionScript knowledge and your game design skills while creating some excellent example games. You’ll learn advanced collision detection skills; professional AI and pathfinding; and how to load and save game data, create destructible environments, and build and switch game levels.

Rex van der Spuy is a video game designer and writer. He s written Foundation Game Design with Flash, Advanced Game Design with Flash and Foundation Game Design with AS3.0. Rex has designed games and done interactive interface programming Agency Interactive (Dallas), Scottish Power (Edinburgh), DC Interact (London), Draught Associates (London), and the Bank of Montreal (Canada). He also builds game engines and interactive interfaces for museum installations for PixelProject (Cape Town). In addition, he created and taught advanced courses in game design for the Canadian School of India (Bangalore, India). When not writing about games, making them, or playing them, he amuses himself by building experimental, autonomous, self-aware, multi-cellular parallel universes out of shoe boxes, scotch tape, spare milk bottle caps and bits of string . He claims, that this is a lot more entertaining than you might think, but we re skeptical.