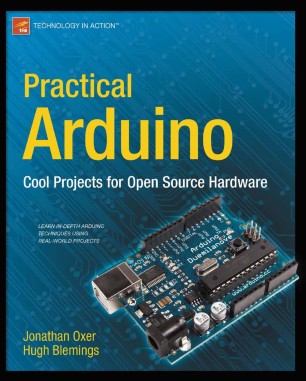 Create your own Arduino-based designs, gain in-depth knowledge of the architecture of Arduino, and learn the user-friendly Arduino language all in the context of practical projects that you can build yourself at home. Get hands-on experience using a variety of projects and recipes for everything from home automation to test equipment.

Supplementary material includes a circuit schematic reference, introductions to a range of electronic engineering principles and general hints & tips. These combine with the projects themselves to make Practical Arduino: Cool Projects for Open Source Hardware an invaluable reference for Arduino users of all levels. You'll learn a wide variety of techniques that can be applied to your own projects.

Jonathan Oxer, who has been labeled "Australia's Geekiest Man," has been hacking on both hardware and software since he was a little tacker. He is a former president of Linux Australia, and founder and technical director of Internet Vision Technologies. He is author of a number of books, including How to Build a Website and Stay Sane, Ubuntu Hacks, and Quickstart Guide to Google AdWords. He has been surgically implanted with an RFID chip and is set to host an upcoming TV show called SuperHouse (www.superhouse.tv) featuring high-tech home renovation, open source automation systems, and domestic hardware hacking. Jonathan has appeared on top-rated TV shows and been interviewed on dozens of radio stations about his home automation system. He was technical supervisor for the first season of the reality TV show The Phone, has connected his car to the Internet (www.geekmyride.org), and is also a member of the core team of Lunar Numbat (www.lunarnumbat.org), an Australian group working with the European team White Label Space (www.whitelabelspace.com) on an unmanned moon mission for the Google Lunar X-Prize (http://en.wikipedia.org/wiki/Jonathan_Oxer).