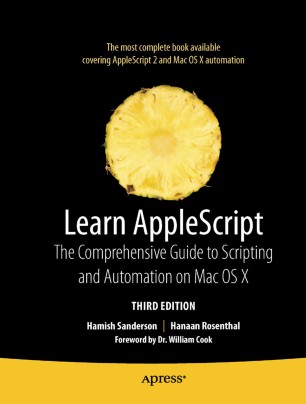 The Comprehensive Guide to Scripting and Automation on Mac OS X

AppleScript is an English-like, easy-to-understand scripting language built into every Mac. AppleScript can automate hundreds of AppleScript-able applications, performing tasks both large and small, complex and simple.

Learn AppleScript: The Comprehensive Guide to Scripting and Automation on Mac OS X, Third Edition has been completely updated for Mac OS X Snow Leopard. It's all here, with an emphasis on practical information that will help you solve any automation problem—from the most mundane repetitive tasks to highly integrated workflows of complex systems.

Hamish Sanderson is a ten-year veteran of AppleScript and professional automation developer living and working in the U.K. Over the years, he has contributed a range of useful libraries and utilities to the AppleScript community and pops up with some regularity on the various AppleScript mailing lists. He is also the author of the highly regarded Appscript library, which brings AppleScript-style application scripting support to the Python, Ruby, and Objective-C languages on Mac OS X.