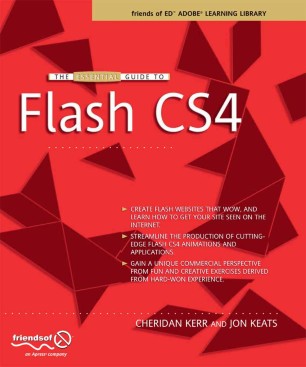 The Essential Guide to Flash CS4

If you're familiar with the basics of Flash, then The Essential Guide to Flash CS4 will take you further in all aspects of the application, animation, sound, 3D, inverse kinematics, the drawing tools, ActionScript, and much more. This book takes all the good bits of Flash CS4 and demonstrates them in methodical and intuitive exercises full of hints and tips for streamlining the creative process. Jump straight into Flash CS4 and start working on real life examples that you can customize to suit your needs.

This book is for intermediate Flash CS4 users as well as the more advanced user who wants to learn about using Flash CS4's awesome new capabilities, such as motion tweening and kinematics poses.

Each chapter has a number of exercises that contribute to an overall project. The exercises are fun and compelling and allow you to place your own creative stamp on them, while still following the steps to completion.

The final chapter focuses on bringing the exercise output together in an overall campaign consisting of a website featuring advanced flash components and advertising banners.

Cheridan Kerr is a self-confessed geek and has been involved in Web development and design since 1997, when she began working on a research team for the Y2K Millennium Bug. It was here that she learnt about the Internet and promptly fell in love with the medium (it took Dungeons and Dragons to a whole new level!). In her career, she has been responsible for websites in the early 2000s, such as Weight Watchers Australia and Quicken.com.au, and worked as creative services manager of Yahoo! in Australia on clients such as Toyota, 20th Century Fox and Ford, which has given her a wealth of experience in Flash design and usability. Currently, she is working as executive producer for a boutique Australian advertising agency. She lives with her unbelievably patient husband, two beautiful stepdaughters and a ferocious cat on the east coast of Australia, and writes reeking piles of poetry in her spare time. Her first book, Foundation Form Creation with Adobe LiveCycle ES, hit book stores in September 2008.