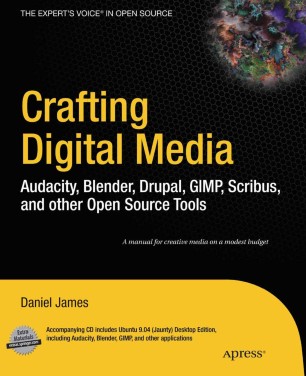 Open source software, also known as free software, now offers a creative platform with world-class programs. Just ask the people who have completed high-quality projects or developed popular web 2.0 sites using open source desktop applications. This phenomenon is no longer underground or restricted to techies—there have been more than 61 million downloads of the Audacity audio editor and more than 60 million downloads of the GIMP for Windows photographic tool from SourceForge.net alone.

Crafting Digital Media is your foundation course in photographic manipulation, illustration, animation, 3D modelling, publishing, recording audio and making music, DJ’ing, mixing and mastering audio CDs, video editing and web content delivery. Every technique described in the book can be achieved on GNU/Linux, but many of the applications covered run on Windows and Mac OS X as well. New to GNU/Linux and a little daunted? Don’t worry—there’s a step-by-step tutorial on Ubuntu for either temporary use or permanent installation.

If you are a creative type who wants to get started with open source software or an existing GNU/Linux user looking to explore this category of programs, this is the book for you! Realize your own personal projects and creative ambitions with the tools this book will place at your fingertips.

Daniel James is the director of 64 Studio Ltd, a company that produces a 64-bit GNU/Linux distribution designed specifically for creative users, and does custom development work for OEMs with multimedia products. He worked on LinuxUser & Developer magazine for around seven years, serving as editor from autumn 2005 until early 2007. More recently, his media work has expanded to include a long-held interest in sound recording, with several music and voice-over projects completed at his own studio. He also contributes regular articles on music recording and related technology to Linux Format and Sound on Sound magazines.