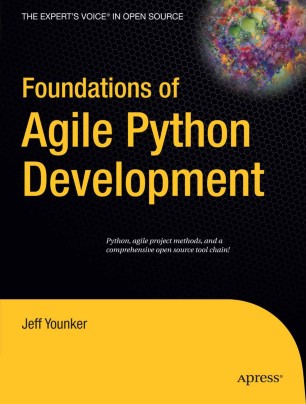 You've long been enamored with the Python language, and have mastered its many nuances. Yet something seems to be missing—a productivity boost that you know is possible but you're not sure how to go about it. This was the sentiment of so many developers before discovering Agile programming paradigm, which embraces concepts such as automation, effective code management, and test–driven development.

Foundations of Agile Python Development is the first book to apply these sought–after principles to Python developers, introducing both the tools and techniques built and supported by the Python community. Authored by Jeff Younker, a well–known member of Python's agile community who is perhaps best known for his creation of a popular Python testing framework, this book is sure to be a hit among readers who may have reached their limits of knowledge regarding the Python language, yet are seeking to improve their understanding of how sound processes can boost productivity to unparalleled heights.

Jeff Younker once trained in mathematics and biochemistry at the University of Houston, but was lost to the world of computers early in his trials. He has been employed in one capacity or another in the world of scripts and programming for over 15 years. He's been developing in Python for the last several years after a long stint working with Java and Perl.