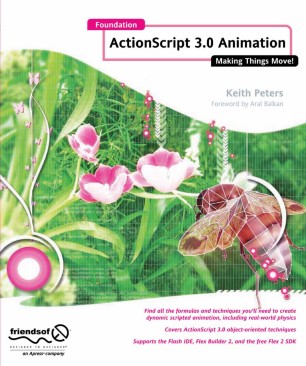 Flash has long been one of the most approachable, user-friendly tools for creating web-based animations, games, and applications. This has contributed to making it one of the most widely used programs for creating interactive web content. With each new version of Flash, ActionScript, its built-in scripting language, has become more powerful and a little more complex, too. ActionScript, now at version 3.0, has significantly matured as a programming language, bringing power and speed only previously dreamed about to Flash-based animation, going far beyond traditionally used keyframes and tweens.

The material inside this book covers everything you need to know to harness the power of ActionScript 3.0. First, all the basics of script-based animation and setting up an ActionScript 3.0 project are covered. An introduction to object-oriented programming follows, with the new syntax, events, and rendering techniques of ActionScript 3.0 explained, giving you the confidence to use the language, whether starting from scratch or moving up from ActionScript 2.0.

The book goes on to provide information on all the relevant trigonometry you will need, before moving on to physics concepts such as acceleration, velocity, easing, springs, collision detection, conservation of momentum, 3D, and forward and inverse kinematics. In no time at all, you'll both understand the concepts of scripted animation and have the ability to create all manner of exciting animations and games.