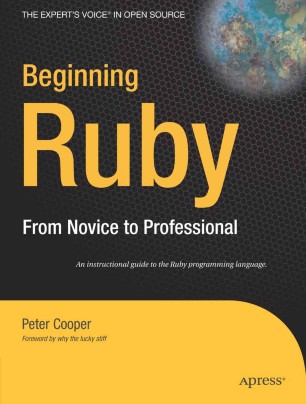 Ruby is perhaps best known as the engine powering the hugely popular Ruby on Rails web framework. However, it is an extremely powerful and versatile programming language in its own right. It focuses on simplicity and offers a fully object-oriented environment.

Beginning Ruby is a thoroughly contemporary guide for every type of reader who wants to learn Ruby, from novice programmers to web developers to Ruby newcomers. It starts by explaining the principles behind object-oriented programming and within a few chapters builds toward creating a genuine Ruby application.

The book then explains key Ruby principles, such as classes and objects, projects, modules, and libraries, and other aspects of Ruby such as database access. In addition, Ruby on Rails is covered in depth, and the books appendixes provide essential reference information as well as a primer for experienced programmers.